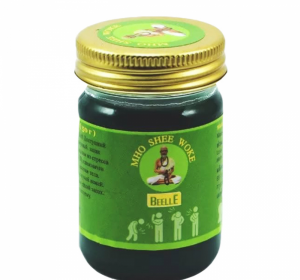 The first Thai balsams were made at the dawn of the formation of Thai boxing Muay Thai and other martial arts in Thailand for the treatment of injuries among fighters. Their compositions were kept in the strictest confidence and were developed by Buddhist monks in monasteries of Thailand for many centuries.
Currently, there are about 100 components in the composition of each balsam, the color of the balsam indicates the spectrum of its action. The full composition of balms has not been studied until now, because Some of their components are of endemic origin, i.e. some plants grow only in the west of Thailand, on the Burmese border. There are no analogues to Thai balms anywhere in the world.
In many countries, they are officially recommended by doctors for the treatment of diseases of the musculoskeletal system.
Thai green balm is in high demand among other balms because of the uniqueness of its main component. This is Clinacanthus nutans (klinakantus drooping), whose properties are associated with cancer treatment. This plant is used in medicine as a powerful antioxidant, quickly heals burns, fights chickenpox and robs.
Just the facts about green balsam:
Inhalation of the balm reduces stress and weather sensitivity, increases the body’s resistance to bacterial and viral infections, including herpes and flu.
Rubbing and massage with it is used for muscle inflammation and is used as a prophylactic agent to fight bed patients with bed sores.
Inhalations with green balsam stimulate the bronchi, liquefy mucus. It is used as an expectorant when coughing a smoker, he brings relief from breathing difficulties.
Balsam disinfectant antiseptic properties are used in the treatment of acne, boils and acne. Balm relieves inflammation, prevents the formation of purulent acne and abscesses. It is also effective in the treatment of fungal infections.
The components that make up the green balsam slow down the aging process of the skin and accelerate its regeneration.
Green balsam will help relieve migraine, strengthen the nervous system, immunity, remove physical and mental and stress and alleviate the depressive state. Thai balm is indispensable for allergists of any type (relieves swelling and irritation of the skin). Helps with itchy skin and insect bites.
Composition:
Camphor, Indian patchouli oil, Barleria wolf, Klynakantus nutans oil, wild liane and grass oils.
Mode of application:
Rub into the temporal part with dizziness, motion sickness, nausea.
For colds and nasal congestion – inhale the scent or smear a small amount of balm under the nose.
For skin inflammations, dermatitis, and rashes, apply a small amount of balm to sore skin.
For inhalation, add a small amount to hot water, cover your head and inhale for 10 – 15 minutes.
If you have a cold, smear the wings of the nose.
Recommendations:
It is forbidden to make inhalations to people with cardiovascular diseases and suffering from epileptic syndrome.
Do not use during pregnancy and lactation.
Not recommended for children under 5 years.
Do not use for varicose veins.
Do not apply to open wounds!
Avoid eye contact.